Super quick update as it is 4:30am here. Today was Justines Birthday so we decided to go an see Elton John. He was ok although I must be honest and say that I expected a little more. I wanted to go and see Sammy Hagar who was also playing at Ceasars but as it was J's birthday, no problem. Then I found out that Elton John finished at 9pm, about the same time Sammy Hagar started. After the show, we quickly ran to the other venue only to be told we should have purchased tickets where we had just come form. The complete oppposite to what I had been told. Anyway, three minutes of monas later, we were given two free tickets worth over $120. I have to say, I rule at moaning. Anyway, the show was in two parts, firstly Sammy Hagar material which was quite good, then a brief interval and the second half saw the inclusion of Michael Anthony (also Van Halen!). The second half was brilliant as they ran through loads of VH songs including Runnin' with the Devil, Good Enough, Why Can't This Be Love, Best of Both Worlds, Summer Nights etc.
We then went to play pokre for an hour and I won about $215 which was useful.
Just to round of J's Birthday, she also wore the new dress that I got for her Birthday. I will try and post some shots over the next day or so if I have time.
Finally, we went to the Voodoo Lounge (famed Vegas club) last night and had a great time despite the huge 65mph winds! That may seem an odd comment but, to clarify if you do not know, it is outside on top of the 51st floor at the Rio hotel! Some famous singer who I have never heard of played call Rianna (I have no idea of the spelling). Also there was Jim Carrey, Jenny McCarthy, some guy from Westlife and a whole loads of others stars. The person I spent most of the time with was some guy called "Jack Daniels" (and his sidekick "coke").
Posted by Simon at 9:34 pm No comments:

Its a Funny Old World

Here is, rather amusingly, a website where you can buy posters of me, fridge magnets, also mouse mats and mugs! You have to laugh.... The image it takes you to is number 28 although if you click back (top centre) to about 23, there are a few more of me playing at the World Series of Poker.
Posted by Simon at 11:28 am No comments: 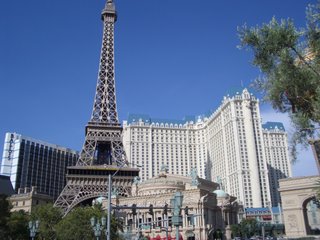 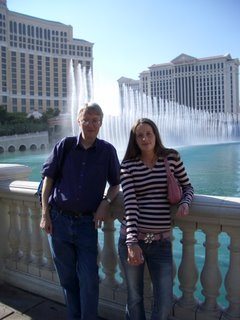 Things are going well, having a lot of fun although have now started "working" rather than playing poker. I reached another couple of final tables so my percentage for payouts is quite high.
One of my friends also came out whilst we were here (also called Simon and pictured on the left with Justine outside the Bellagio, with fountains in full swing!). He actually left yesterday after a 10 day visit.
Last night we went to The House Of Blues to watch David Lee Roth (ex Van Halen singer in case you didn't know!). The show was a lot of fun and I must say I thought he performance was considerably better than last time I saw him circa three years ago. Even though it was him as a solo artist, the set list was made up of more or less only Van Halen songs (three DLR songs as I recall and two of those were "Californian Girls" and "Just a Gigolo"). Van Halen songs included Somebody Get Me a Doctor, Unchained, Ain't Talkin 'Bout Love, Jamies Cryin, You Really Got Me, Dance The Night Away (awesome rendition), Hot For Teacher, Panama, Jump (including 1984) and Ice Cream Man. I feel sure that I have missed a load out but still, a great set.
The one downside to the evening was when we ordered food, J asked the waitress what she would suggest as she was Vegetarian. The Salmon seemed a good choice, she just didn't count on the sausage that was in the risotto! Needless to say, I spoke to the Manager, and then his Manager. I mean come, on, if it was Joe's Cafe on the backstreet, extreme caution needed but this is the world reknowned House Of Blues!
After the show had finished we caught the end of another band in a small bar. They were very funky (not in a musical sense) and played what I can only describe as "skiffle" music. They played some cover versions of classics such as The Vapours "Turning Japanese", Twisted Sister "We're Not Gonna Take It" and Slades "Cum On Feel The Noise". Very funny. I bought the CD but no doubt it wont be as funny without copious amounts of Jack Daniels inside you! Tonight I think we are heading to the Voodoo Lounge with some people from work but we will see later. I will try and post some more photos in due course.
Keep Safe
S
Posted by Simon at 10:58 am No comments:

The poker continues to go well, I just finished a small tournament at the hotel, $60 buy in and I came second for $439. Unfortunately the hands continue to elude me, I am just being a little "creative" with my play (should read "raising with crap").
Last night we went to "The Venetian" to watch Phantom of the Opera. Its been quite weird, we have spoken to many people who have seen the show before but not one person has said "I have seen Phantom of the Opera before", they all seem to say "I have seen Phantom of the Opera four times" or similar. I did thoroughly enjoy. The main reason for going was because it is Justines birthday soon as she really wanted to see it. We had an opportunity to get great seats so took up the chance.
Still a few days of the holiday remaining although not entirely sure what we will do. I still want to get a Harley for a day and go and cruise around Vegas. I also feel I should go and see the Grand Canyon although, it will of course involve flying (or a long journey) so the jury is still out on that one.
Anyway, just a short one as it is very late, until then,
Keep Safe
Posted by Simon at 5:33 pm No comments:

So much to report, so little time! OK, so, taking that back a little, we arrived in London on about the 5th of July, spent three nights there working from the office. Played a little poker (a office tournament). Nothing too exciting although I won about £170 in a cash game so that was ok. The hotel was good, we stayed at the Sanderson which is next door to the office so very convenient (just a shame work did not pay for it all!). The fact that it is maybe the best hotel in London also helps.
On the Sunday we flew out to Vegas. All considered the flight was not too bad. It was very empty and as a consequence they gave me four seats which meant I could lie down and try and sleep. Still, flying is... well, flying! We were meant to walk, jog etc, not fly. My hatred for flying grows.
The hotel at Vegas is ok, it is Aladdins, soon to be Planet Hollywood. Nothing special but not offensive. We were obviously pretty tired which was not great news as the following day provided my first World Series of Poker event, the $1000 buy in No Limit Hold'em. The bad news for the people that backed me was that I exited after a couple of hours. My pocket jacks ran in to pocket twos, which ultimately turned in to four of a kind, twos! My second World Series of Poker event is on Tuesday so hopefully I will have better news for the backers!
Aside from the WSOP, poker is going very well. I got a final table of a tournament at out hotel the following day and finished sixth, it wasnt a huge payout, only about $170 but better than nothing. The following day I decided to play the big one at Caesers Palace, the buy in was $130, it had a great structure, a 40 minute clock. After about 7 hours I hit the final table and with only four of the original 170 starters left, we decided to make a deal and split the prize pool up based on a chip count. I got just under $2700 for my work. I was very pleased with my play, especially as the biggest hand I got throughout the whole tournament was a pair of jacks (these are starting cards for the non poker playing readers!). It was quite hard work but worth it at the end of the day.
Tonight we went to see Dashboard Confessional who were superb. They also had two support bands, Say Anything and Ben Lee. Both of which were entertaining. To finish the evening off, we went to play a little Paigow Poker in the casino (it is a card game against the house, not "real" poker) and I won $125 in about 15 minutes. At that point, we decided to go to the restaurant and eat.
Had quite a funny day earlier, many of the casinos run promotions to try and entice you in to their gambling dens. One of which was at Caesers. I went to the Promo Desk to "swipe our card" to see if I had won a free gift for the day. I was a little bored as it was hot (it was 117 degrees earlier apparently) and we had queued at other desks to get the bad news, we had not won. Well, I am sure you can imagine my shock when the women announced "Congratulations Sir, you have won Golf Clubs". Now I dont mean to be ungrateful but, I thanked her and asked if I can have something else as they are not a lot of use to me! I am waiting for them to come back to me. I even told them they can just give me a T-Shirt and we can call it quits! I mean come on, if I get the delievered to my hotel, it will cost a fortune to get them back to Greece, if I ask them to deliver them to Greece, it will also cost a fortune. Lets also be frank here, golf can be very dull, especially when we don't have a golf course on our Island. The one benefit is my bunker play would improve with all of the sand surrounding us!
All in all, a nice few days and very profitable. I will try and post some photographs over the coming days.
Anyway, for now, Keep Safe
Simon
Posted by Simon at 6:17 pm No comments: