Do you know, today it is three years since I broke my back? Quite incredible. So much has happened it that time that I could never imagined.......
Keep Safe
Posted by Simon at 7:12 am No comments:

The Poker Keeps Getting Better 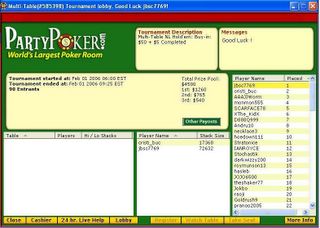 I have been playing a lot of poker over the last week or so and it has been very profitable! (Click on the image above for a bigger version). A couple of days ago I won $1500 for finishing third in a tournament (although I agreed a "saver" with Matt from work so he got 20%), the cash game is going even better, especially the stud games. As I am on day off today, I decided to enter a tournament that was $50 to enter, now I have just won that for another $1260. I even afforded myself a few cashouts which I do not do so often! I think that is about $5,000 profit in the last week or so now. The one down side is, I have been working really hard at work and am exhausted so, not as much time to play as I would like. Now, a couple of people have asked about "sponsoring" me for the big one in Vegas in July / August for a percentage, keep the offers coming! First prize in that is a cool $10 million big ones.
The funny thing is, we should have been going skiing today but Justine woke up with a really bad migrane.... well, it is not funny really but you know what I mean!
Keep Safe