Fires Further Along The Coast 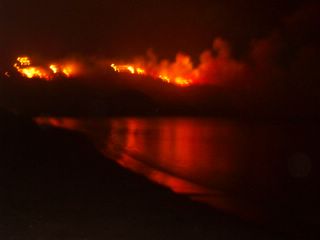 This is taken from the beach front in Kalamaki. Again, as the picture below, this is a huge area that you can see. In a perverse kind of way, it looked so nice seeing the flames reflecting off the sea. I am not sure what the repercussions have been for the people that live in this area but it appears to have, miraculously, missed all of the houses. The smoke is thick and going out to sea for miles.

Fire takes over part of the island 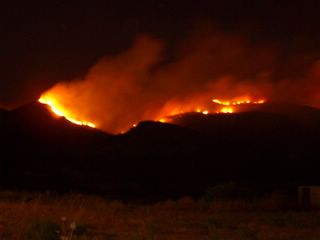 We have had huge fires tonight. They have spread so quickly and seem to cover an area about 4 or 5 miles wide. Whilst the pictue above is quite blurred, it is the hills towards the airport (for those that know the area). This really is a huge peice if land in view. 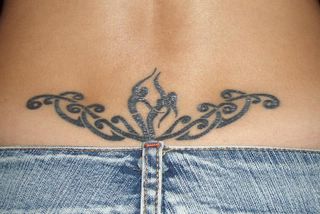 A picture of Justines new tattoo. It is on her lower back and is a man and a woman. Most people dont notice that, hence why I point it out!! 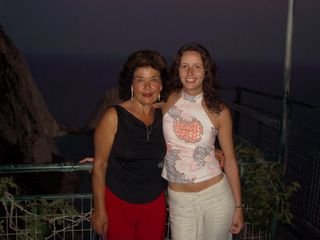 The last picture of myself and the one above are both of us with our "Greek Mum" She is actually our landlady although she treats us like her children. Always bringing my dinner around. Wheneverwe may go out in to Laganas (the local holiday resort) she always makes sure she sees us off and tell us to beware! She bought Justine the most lovely tree/plant for her Birthday. (It was yesterday). It must stand 5ft tall. The vase was perfectly wrapped and lovely red and yellow ribbon all over it.

Television did not spoil me! 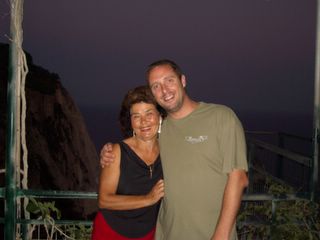 Well, I am back from the UK, I had an absolute ball. It was a tremendous experience appearing on the TV and it was way beyond my expectations. Unfortunately I did not make the money so, that was a disppointment but I thoroughly enjoyed myself. My fear is, it will not show the early hands that I played where I was picking up poker chips. That part was not good TV. I would raise, then a fold. I was then knocked out very early when my pockets tens, with a ten on the flop did not hold up. (I lost to a straight). Poker is going well online though so, I am a happy bunny.

Easy title today as it is highly topical in light of yesterdays events. I actually did not watch too much of it as it was on BBC. BBC and ITV are really the only channels that we do not pick up here. Shame. So, I was pretty excited as one of my favourite bands of the moment were playing. The Killers. I got to the bar about an hour and a half before they came on and was giving a great deal of thought as to what 2 or 3 songs they would play. Some bands even played 4 songs so, I was hopeful. Finally Snow Patrol finish and I am getting excited about their impending arrival. I take a quick wee wee (far too excited to watch them apparently) and they Come on stage. They are looking pretty cool. They just start the opening of "All These Thing's That I've Done.....perfectly timed with a large group of girls entering the bar. No it is pretty busy in there anyway so seats are at a premium. So, the helpful workers find a hidden table and put it RIGHT IN FRONT of the large screen and a chair with 12 inches of my face. Cue very Pis**d off Simon. Anyway, Justine managed to make a fairly load derogatory comment (involving profanity!) and they moved. OK, so, i wonder what song they will play next. Song finishes. I know, what a great time to take a look back at what happened earlier in the day at Live 8. You are kidding me right? Ayya....... So I wait an hour and a half to partially see The Killers on TV. Oh well. The only other band I was bothered about seeing were Velvet Revolver. We decide that we are going out after they have played. So, they just walk on to the stage and guess what. They lose the satellite signal. Marvelous. Exit.
I mentioned in my last blog I played a few poker tournaments lately. To cut a very long story short, I won the tournament that I mentioned. The outcome is, on July 20th, I will be going to England to appear on a TV programme called Late Night Poker. I think it is showing on Channel 4 sometime in August but I will post on here if I remember. (What I actually mean is, I will post on here if I don't make a complete fool of myself!) First prize equates to about £50,000 (£25,000 cash and £25,000 of tournament entry fees) although I have decided to donate half of any money I make to a charity. (www.poker4charity.org). They are "auctioning off parts of me" and will hopefully make some decent money out of it. It is actually worth visiting the site as they do some great work. Pop over and donate!!
But save £10 to buy 'The Killers' album as well.
Keep Safe
Posted by Simon at 12:41 am No comments: