My blog can now be accessed by entering the URL www.oneninesixnine.com as is shown above (The individual numbers 1-9-6-9 in words!). It is a domain that I have held for some time but really never got around to doing anything with.
Posted by Simon at 1:19 am No comments: 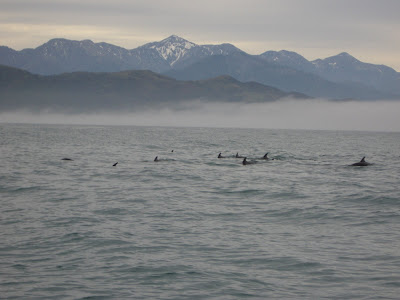 Here is the photograph as mentioned below, as are the full details about the trip.
Posted by Simon at 1:13 am

A Belated Catch Up

I have had a read through the last couple of posts as I had forgotten what I have, and haven't said! Well, by way of a final update on the New Zealand trip, the day out trying to swim with Dolphins was successful, I finally managed to fulfil a life long dream and swim with them in the wild. One of the things that suprised me about the experience was that for some reason, I expected us to be going in to the water from the beach and the dolphins would be close by. Far from it. We went a very long way out to sea, I would guess somewhere between one and two miles out, maybe further. It was only towards the end of the trip that we got anywhere near the land (as shown by the photograph above). The first few dolphins that we saw were maybe in two's or three's and left fairly quickly so there was a lot of 'in and out' of the sea initially. After about an hour, in the distance (well, as far as I could see as it was so foggy we could barely see at all) I spotted a group (pod?) of around two hundred. 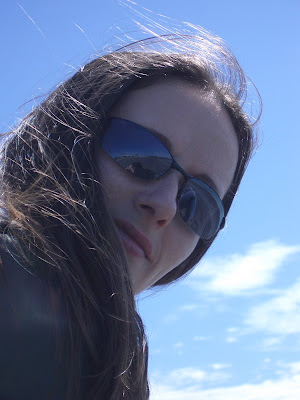 It really was quite a thrill. The boat caught up with them and in we went. It was an incredible experience. The only downside for me was that I was feeling very sea sick and had to miss the last (and best) swim due to the fact that I was throwing up all over the boat. I knew it was coming so could not risk going in to the water. I still manage to see a lot of what was going on and Justine said it was amazing looking down and seeing all the dolphins swimming underneath her. and it certainly appeared so. I am hoping that we will return, probably sooner than expect, and see / experience this again.
The picture above (of Justine) was taken on the beach at Kaikoura. Everyone that has seen it really likes it so, I guess you could say, 'by popular demand'...here it is.
I will do a post very soon with all of the latest updates over the next day or so, possibly even today. Until then, Keep Safe.
Posted by Simon at 11:53 pm No comments: