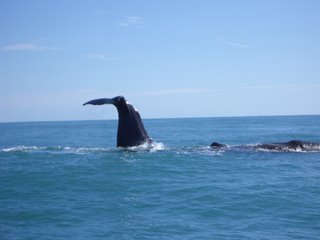 Merry Xmas to one and all.
At the last minute (of course!) we decided to head off to New Zealand for four days over Xmas. We flew in to Auckland on the way as we were unable to get a direct flight to Christchurch at such late notice. One of the main reasons for coming was to fulfill a personal goal and swim with dolphins, also to see some Whales. For many years I have had a fascination with these animals, even going as far as ‘adopting a dolphin’ via the Whale and Dolphin Conservation Society in the UK. There is an area approximately 180km north of Christchurch called Kaikoura and it is famed for Whale Watching Trips and also Dolphin Encounters.
We arrived on Saturday 23rd and took the fairly lengthy drive to Kaikoura. We arrived pretty late and to be honest, we were absolutely exhausted. The night before we flew out, I was in a poker tournament and managed to finish in third place so that meant we did not get home until approaching 2am. On top of that, we had to be at the airport the following day by 9:30am. Add in to the equation the flights etc, you can imagine how tired I was. The last hour of driving was unbearable and on many occasions, I was ready to stop and sleep at the side of the road. Anyway, we made it up to Kaikoura, grabbed a sandwich as we had not eaten (apart from the food on the plane over, Air New Zealand First Class is excellent!) and went to bed. We had one huge concern… due to bad weather, the Whale Watching trips had been cancelled for the previous three and a half days. If we missed our arranged sailing at 6:15am, that would be it. We would not be able to get any others so, fingers were crossed. As the alarm went off at 5:45am, I dived out of bed to look outside the window to get an idea of whether we would be going, or bitterly disappointed. It looked nice out there so without delay, I called the company to ask if they were running. It was great news, they could not confirm any other outings for the day, but the first one, the 6:15 would sail, albeit with a ‘severe sea sickness’ warning. We got down to the ocean and eagerly awaited our trip. The place is very well run and loads of merchandise on offer for those that choose to purchase them. We boarded a bus and they took us to the port where we would be sailing from. All of the crew seemed very well informed and took us out on a catamaran. The sickness warning seemed to hold true and I must be honest, I did not feel in the best of shape for most of the trip but, it was worth the discomfort. Whilst out at sea we saw six huge Sperm Whales! (the tail of one is shown abovem just as it was about to dive down). In all, I guess we were at sea for about two hours. Unfortunately we did not see any Dolphins although to be fair that was not the purpose, the whales were. I hope we will have time to do the trip again before we leave but, we will see. We did actually also see several albatross.
That was Christmas Eve. Christmas Day was also spectacular and if I am honest, one of the best I have ever had.
We are staying at a place called Hapuku Lodge, just outside Kaikoura. The accommodation is incredible (although at $550 a night it should be!) Our room is an incredible Tree House! Very modern inside, loads of handmade furniture but with all mod cons. As most people who know me can vouch, I do like a little moan and am rarely satisfied by hotels. Not the case here. I would struggle to find a single fault with the place. Anyway, the made us up an awesome picnic (pictured much further above) including just about anything you would wish for and beautifully presented. We grabbed a bottle of champagne and fresh orange juice, got in the car and headed out to a local Seal colony about 10km away. On the way, we stopped at a local roadside “crayfish” café and purchased some freshly caught, freshly cooked garlic mussels. They wrapped them in much the same way we would wrap fish & chips in the UK, in paper. We then went to the seal colony, found a great spot and had an amazing lunch. Loads of seals around, playing in the sea and sitting on the rocks by us. I really could not have asked for anymore. An truly awesome day.
After that, we returned to the tree house, had a siesta and followed this by a traditional Xmas Dinner. Far too much to eat but, don’t we always during the festive season!
Tomorrow is our last day in New Zealand and, weather permitting, we are booked to go on the Dolphin Encounter, sailing at 8am. Fingers are crossed again. If the Whale Watching was anything to go by, it is going to be an exciting day.
Keep Safe.
Posted by Simon at 4:32 pm No comments: 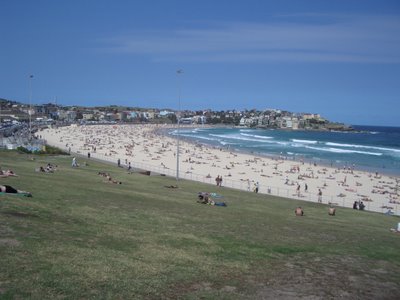 Today we took our first visit to the World Famous Bondi Beach. One of the first things that struck me was the area that it was actually in. I expected in to be stunning apartments, lavish hotels etc. I could not have ben further from the truth. Maybe that was just our exit in but the beach is certainly the best bit about the area. Aside of that, it is a great beach. From a distance (for example where I took the above picture from) the waves do not look too big but I have to tell you, they are, they are also pretty powerful! We both had a great time there and will certainly revisit the place again, probably on Christmas Day. Whilst there, I decided to get my hair cut (shaved is a better desription). The girl who did it was fabulous and friendly. It came as little suprise as she was Greek! Of all the places to stop, I get a Greek to cut my hair. Even more bizarre was the fact that she actually grew up in France.
I start training a new group of staff tomorrow which means it will be an early night for the next few days. I have worked some pretty tough days recently and sleep seems to be at somewhat of a premium.
Anyway, until next time....
Posted by Simon at 10:02 pm No comments:

Justine in the Blue Mountains 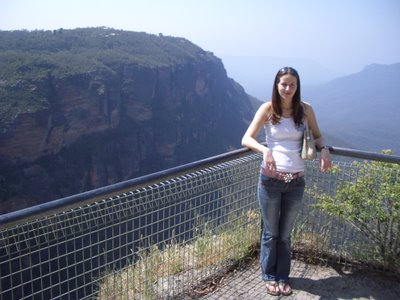 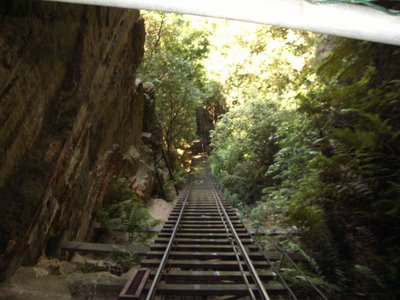 One of the Glenbrook Kangaroos 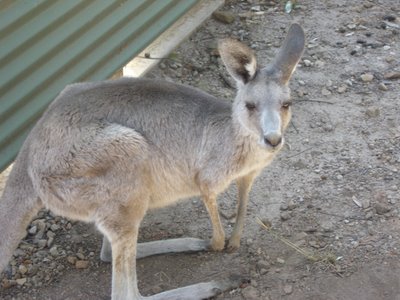 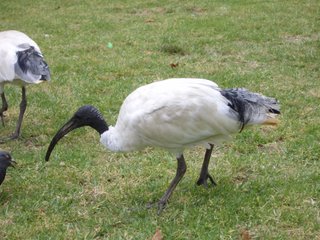 Work has been taking up pretty much all of my time since arriving but we were able to go away to the Blue Mountains last weekend. We rented a car for 24 hours without having really known what we would use it for, other than 'exploring' a little.

So, we headed towards Hertz, stopping briefly at a park in the centre of town for a coffee and piece of carrot cake. As we sat down to eat, the hugest bird flew in (pictured on the left). Ungainly does not even cover it. Clearly this 'fella had not had much practise before. Feathers were going everywhere and his legs making an almost peddling motion. Highly musing. Anyway, it was the bird pictured bove. I think he was only interested in a bt of my cake but soon got bored.

After collecting the car, we decided to head to a place called Palm Beach. This is somewhere that Justine had said she wanted to visit before we left so it seemed an appropriate time. The main reason she waned to go was because one of her favourite TV programs is filmed there, Home and Away. There wasnt actually that much to see there but it is a very nice place.

We returned home at about 8pm on the Saturday night and decide we wold head up to the Blue Mountains that night as it was a 90 minute drive, thus saving time in the morning. Despite the hotel looking nice, it was a bit of a 'hole' to be honest. Lovely on the outside but in serious need of renovation internally. A typical stately home type affair.

The following day we toured around the Blue Mountains, the highlight being a place called Scenic World. As the name suggests, it provides some awesome views and also a thrill or two along the way by way of the worlds steepest railway.

I say that was the highlight but there was one further 'highlight' that day. On the way home we stopped off at a National Park called Glenbrook. It is in the middle of nowhere and you have to drive through a few miles of tracks, through a 'ford' (water covering the road) and up and down some incredibly steep hills. It is worth the trip because eventually you come to a clearing that is a picnic area. In the late afternoon you get Kangaroos come out in to the area which is quite a sight. The one on the photo above was one of about half a dozen that we saw. They seemed quite comfortable with us getting close to them, as long as we still kept a bit of distance. It was a great weekend and we are hoping we my be able to get back up there before we go.

Last night was our Staff Christmas pary which we had in quite a funky area of Sydney called Darling Harbour. I only had two drinks all night as I have been so exhausted so no hangovers today I am pleased to report.

I will post a few photos from our trip so far over the coming days.

Whilst I enjoy Hong Kong, I was actually quite glad to be getting on the way to Sydney. It still felt like we were 'in transit' at that point. So, we packed the bags, headed to Hong Kong Station (a remote airport luggage drop off for want of a better description) and decided to head over to Tung Chung in an effort to get to the Po Lin Monastery, or more specifically, the Tian Tan Buddha. Whilst living in the UK, I did flirt briefly with an interest in Buddhism as they seem to have some pretty sound values but never really explored it enough to be honest. It seemed kind of logical to head over there and check the place out. To set the scene, it is built in the middle of nowhere (Lantau Island to be specific) and involves crossing a lake, over some mountains and there we are! To add a tourist touch, they have actually built a cable car which takes about 20 minutes, and made it seem somewhat like a theme park feel, calling it Ngong Ping. A very scenic ride, no doubt even more impressive for those with head for obscene heights. Anyway, cutting to the chase, the place was simply amazing and it is very hard not to get caught up in the idea. We saw a small theatre production (Walking with Buddha)about the progress of Buddism, toured through the area and then took the large walk up the 268 steps to the top. We of course went inside and later, down to the Po Lin Monastery. It was a remarkable place inside although by this point, we were getting rushed to head for the airport. We purchased a few souvenirs and left the area for a 30 minute wait for the cable car. The only downside of the whole thing was that we were so rushed. Hopefully one day we will get a chance to return. As we left I purchased Buddhism for Dummies. Hopefully this time I will find the time to read it!
Until next time, Keep Safe.
Posted by Simon at 10:07 pm No comments: 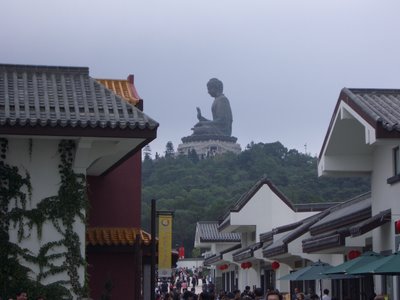 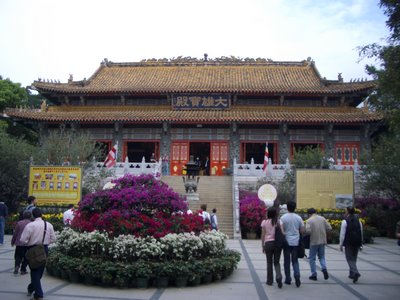 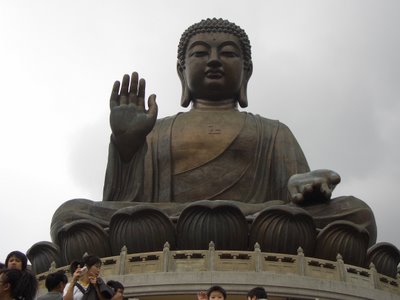