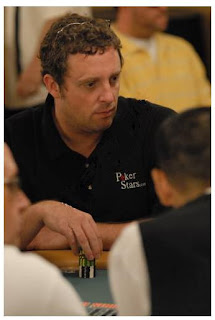 Whilst in Australia I played in the Aussie Millions Poker Tournament. I will try and fill in more details over the coming weeks but it was reasonably successful, the highlight being that I made the final table of the Team Event with Troy from the Australian Office, eventually finishing in sixth position. I also played the $10,000 buy in Main Event and finished a respectable 95th out of approximately 800 runners. I fell just short of the money which was of course disappointing but, I went there with one goal. That was to win it. I could have easily limped in to the money and made $15,000 but decided to try for the big one ($1,500,000 first prize). I also went deep in the Feature event, only being knocked out by a 'horrific bad beat' against one of the world best players, Scott Fischman (my AK v his AQ). It was a tremendous experience and one I hope to do again next year. There were some very complimentary things said about my play whilst there, some verbally, some in print. One nice section was on the PokerStars Blog which read as follows:
"PokerStars own Greece-based Simon Cook staged a tremendous comeback on Day 2, after falling as low as 6k in chips, Cook spent a lot of the middle levels with about 13k to his credit. By the end of the final session, he had amassed 59.6k to be above the average stack.
Simon rallied with a cunning bluffing exhibition, the highlight of the key pots he won:- With J-10 in the hole, Simon called pre-flop.The flop came: 8 7 4 and his opponent bet out 2k. Simon called, with obvious intentions of taking the pot down on the later streets.The turn came: 5. Again Simon's opponent bet, this time 5k, but with the 1 card straight on the board, Simon came over the top for another 17k, setting his opponent all-in. After deliberating, thinking, shaking his head and squirming, the initial raiser flashed his K8 (top pair, second best kicker) to the gallery and threw it away. Simon cheekily showed his JT bluff to the table and took down another pot.
Simon Cook is one player who mixes his game up enough and plays a wide range of hands, as all of the top (aggressive) tournament pros do, to give him a chance of figuring the finish on the back of his first day performance."
p.s The photo at the side is actually from last years World Series of Poker, not the Aussie Millions.
Posted by Simon at 1:13 pm No comments: 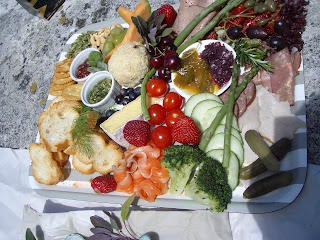 I can not recall if I said in a previous post but we had a fabulous lunch on Christmas Day. We drove to a seal colony nearby (in New Zealand), stopped off on the way and picked up some freshly caught Mussels. It is, for want of a better phrase, a roadside caravan that sells crayfish and mussels. All freshly caught, and all freshly cooked. We added that to the platter that had been prepared for us by the hotel (pictured to the left) and had a lovely lunch, all capped off with a bottle of champagne (you pronounce the 'T' you know...sorry, an 'in joke') and a fresh orange juice. As you can see, they were not shy with the lunch and included all manner of delicacies to get the taste buds dancing!
As you can see, there was fresh salmon, beef, salami, turkey, asparagus, sun dried tomatoes, olives, cheeses, cucumber, broccoli, cherry tomatoes, grapes, strawberries, melon, cherries, all manner of nuts, crackers and toasted bread. It really was an awesome lunch. The one downside being that it made Christmas Dinner a bit of a struggle in the evening!
Posted by Simon at 1:00 pm No comments: 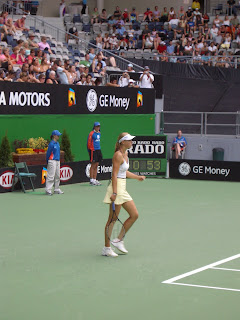 We went to watch the tennis that was taking place in Melbourne at the same time as the Aussie Million Poker Tournament that I played in. It was nice to take a day off from the poker as it provided a great break from the pressures of the previous four days. Maria Sharapova was the highlight of the trip :-). Davydenko was better at tennis but for some reason didn't quite meet the exacting standards set by Ms Sharapova. As the weather was so hot, it also gave me an excuse to spend some of the $7,500 winnings from the day before on a nice new pair of Prada sunglasses!
Posted by Simon at 12:51 pm No comments:

The slow catch up begins... 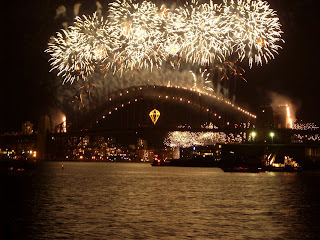 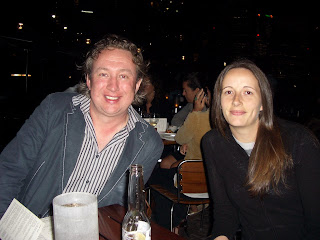 If a picture paints a thousands words, above is my 2000 word essay.
The top picture is obviously part of the New Years Eve Celebrations in Sydney. Below, that is quite obviously Justine and John (Oscar). John was out in Australia for the cricket. The funny thing is, we only ever seem to meet up at various exotic locations around the world watching sporting events! (Pride Park in Derby does *not* fall in to the exotic section, we will save that for Sydney and the World Cup in Nuremburg).
Posted by Simon at 12:43 pm No comments: