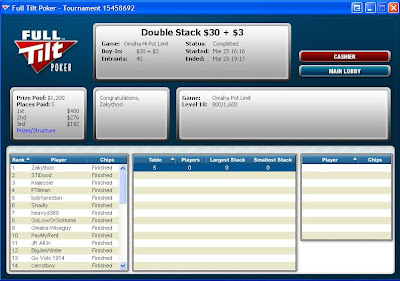 OK, I didn't quite make the post a week or two ago like I said. Anyway, I just finished a small Omaha Tournament (its a poker game for those that don't know!) and won it. I am dreadful at Omaha so thought I should play some more to improve (hence why it was only $30 to enter). First prize was $480. Not a huge win but still, it was nice to take it down as I am so inexperienced at the game. Before it, I thought I fancied a change from Hold 'em and Stud, glad I did now!
The update on work has been delayed very slightly but I gather all will be revealed on Tuesday of next week, stay tuned!
Posted by Simon at 9:24 am