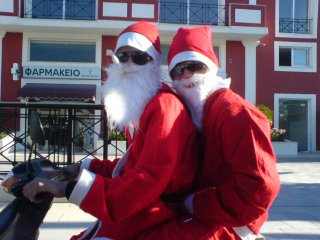 Not been a particularly exciting few days. We have had loads of big storms, the likes of which I have never seen before. The winds are so powerful it is not unusual to see trees literally ripped from the ground beneath them. It's also been pretty cold.
Luckily that is also broken up with some fabulous weather.
Its amazing to think that the tourists will return soon, only about 10 weeks now. It is actually quite funny seeing everybody rushing around, trying to clean the place up after four months of doing nothing. All we need now is for them to start thinking about doing something with the roads. They are not great at the best of times but at this point, they resemble something from a war zone.
I was just scanning through the photos on my phone and came across the one shown here. It was actually taken on Christmas Eve, two Santa Claus riding along on a scooter. Highly amusing. Its a very good job that I can think quickly on my feet, I had to explain to Justine how it was possible that there could be more than one Father Christmas. Luckily, she still believes in his existence and it was merely his brother. Rudolph was sleeping after all the hard work over December.
Poker continues to be profitable and now I am even more keen to go to Vegas for the World Series of Poker. The one down side is, the holidays at work are appalling, you only get 20 days. If I take 15 to go to Vegas, that leaves 5 for the rest of the year. Not good. Its actually quite surprising, they are such a good company to work for in almost every other way. Obviously just don't like you having holidays!
The flights and tickets are all sorted for the World Cup now, the plan is to meet Tony in Munich, we will rent a car the day before and then head down to Nuremburg for the game. It's incredible that these boys get away with it but for an average hotel, over 500 euros for two nights. I wouldn't mind paying that or indeed more for a decent one but for an average one, not good...
I can't recall if I have said this before but, I have spent so much time watching "24" on DVD the last week or so. I went to play.com and they had the first four seasons at only 17.99 each. I had never watched one before but recall seeing the trailers for the first one. I wanted to watch it but, one skiing holiday later, plans kind of changed! Anyway, I purchased all four and it rocks! If you don't know anything about it, go to my "suprise" link on the right hand side (although not much of a suprise now!!).
Anyway, for now...
Keep Safe
Posted by Simon at 10:59 pm