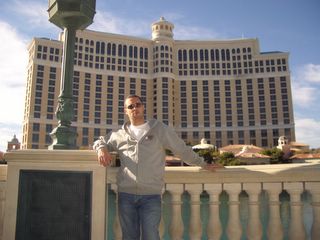 I made reference to my recent trip to Las Vegas, well, whilst there i played in two satellites (poker competitions with the winner advancing to a more expensive competition!) to try and win a place in...another Super Satellite....to win a place in the prestigious main event of the World Poker Tour (WPT)(Confusing or what?!?). The normal entrance fee for this was $15,000 (£1.8 million first prize) so a £185 satellite seemed a better option! I won one of them but failed in the final Super Satellite after over 4 hours play. So near, yet so far.
The picture above is the host hotel for the event, the rather fabulous Bellagio Hotel. To my mind, the finest hotel in Las Vegas. Other than poker, the hotel is also famed for a big part in the movie "Ocean's Eleven" and its incredible water fountain display, all to music.
Whilst I was unsuccessful in the WPT event, a nice win at Binions Hotel & Casino (also famed for holding the World Series of Poker) on the final Sunday of my trip, made the holiday even more memorable.
Whilst there, I got a chance to see one of my favourite bands, Journey and also a Prince tribute band called Purple Reign.
The hotel we stayed at very kindly gave us two free tickets to an event called the "Billboard Music Awards Ceremony". As the name suggest, it is the music industry acknowledging achievements throughout the year and also a "lifetime achievement award".
Many of the worlds top artists played including Usher, Nelly, Alicia Keys, Destiny's Child, Green Day, Evanescence, Gwen Stefani, Sheryl Crow, Diana Ross and the final award going to Stevie Wonder. There were also appearanecs by Britney Spears, Duran Duran, Paris Hilton ;-) Maroon 5 and many more.
I suspect Justine enjoyed the show more than I did but still a lot of fun.
Keep Safe