A great day at the office 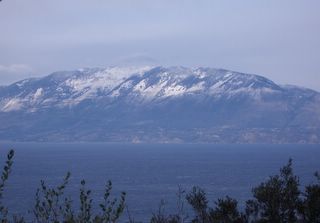 Firstly I will get the poker chat out of the way as I know it is not everybodys cup of tea!
It was a great day, I played in four low limit SNG tournaments (honest it was low limit Mum!). Started off with two No Limit hold ems and got a first and second place, then moved onto to Limit Omaha H/L and won it and finally Limit Stud H/L and won that as well! I have very little experience of stud Poker but thought I would give it a go today. I was delighted with my performance and took an early lead and never gave it up. With five players left I had 7,500 chips, second place a mere 1,500. My Omaha game is developing in a big way and I am actually enjoying it more than NLHE. Tonight I am in a competition with the winner taking a place in the Eurpean Poker Tour at Deauville in France. Over 115 entrants so low chances but, we will see.
Poker chat over.
It has been really cold here the last week or so (yesterday aside when I was outside topless, not a pleasant site) I can see Kefalonia in the distance from our house and the mountain (pictured above) is snow capped. On Sunday, we took a drive to the North part of our island and had a good look at mountains over the water. Kefalonia really is a beautful part of the world and if you visit this year, I would certainly suggest a visit if you are here for two weeks. Unfortuantely you need 2 days to look around it so I think a weeks visit would mean you miss a lot of Zakynthos.
Most of my Open University stuff is hre now, it really is quite daunting starting study again, it has been nearly 20 years since I did anything like it (football qualifications aside) but, I am actually quite looking forward to it now. I had a flick through my course books. At best they can be described as "dull" but, I guess that is study for you. The biggest problem is I am reading two other very good books at the minute (Dan Browns "Deception Point" and Dan Harringtons "Advanced No Limit Hold Em Tournament Play") and want to read them, not "Accidental Empires" or whatever.
Anyway, another Blog on its way over the weekend.
Keep Safe